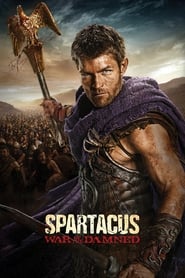 Spartacus, determined to bring down the Roman Republic, now leads a rebellion swelled by thousands of freed slaves. Roman leader Gaius Claudius Glaber has died, and former rivals Naevia, Crixus, Gannicus and Agron become rebel generals, joining Spartacus in the war against the empire. The Roman Senate turns to a ruthless politician and soldier, Marcus Crassus, to put down the slaves. Crassus takes on a young rising star – Julius Caesar – as an ally.